3 Little Kittens: The Rest of The Story 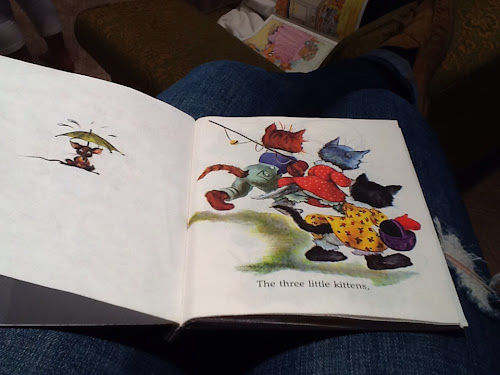 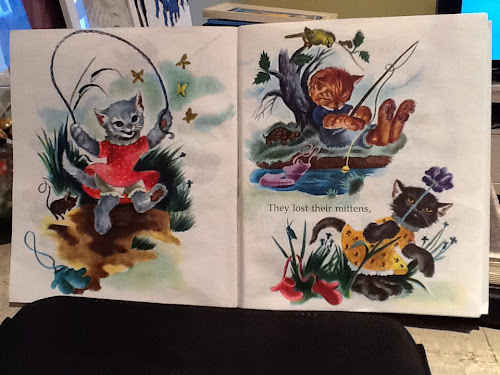 The three little kittens, they lost their mittens.

(But they were having a perfectly marvellous time! They were dressed before lunch, playing together nicely, getting outdoors, playing with their Christmas toys, exercising, exploring nature, and staying out of their mother's hair.) 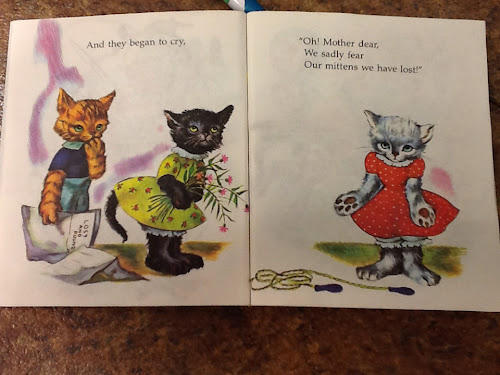 And they began to cry.

(Why? Mittens are fifty cents at the thrift store! And no mother worth her salt should ever have fewer than two replacement pairs. Per kitten.

And look how they remembered to bring back their toys, instead of leaving them in a muddy gully.

And they brought flowers.

These are good little kittens, so why do they cry?) 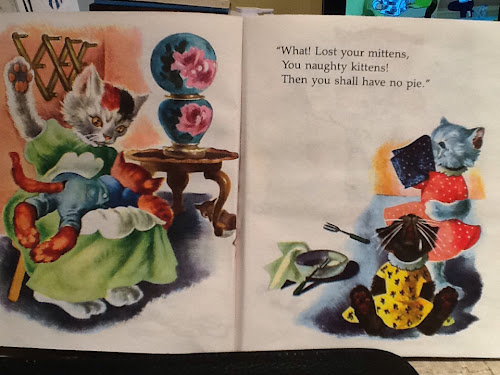 Probably because their mommy is a Nazi. Sitting there in her rocking chair, watching her stories, puffing on a cigar, and beating her little kitten arses at the slightest provocation. And probably stuffing her irritated little face with pie when no one is looking. 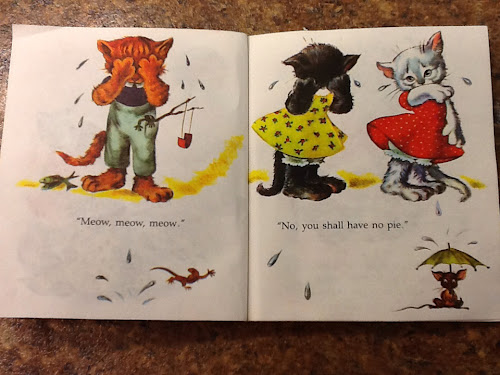 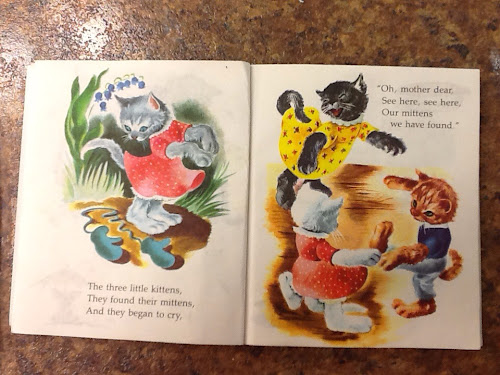 (Those poor kitties crawled around on their bellies for four days and nights without food or water, searching not for mittens- no. For love. From their own pathological mother. It's all they've ever known.) 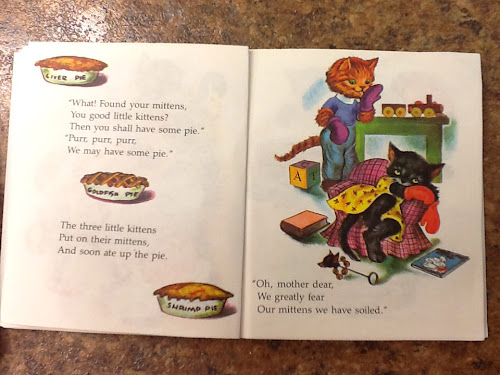 She made them do that.

Keep on their mittens. And just wait for her chance to pounce all over them, hissing and spitting. 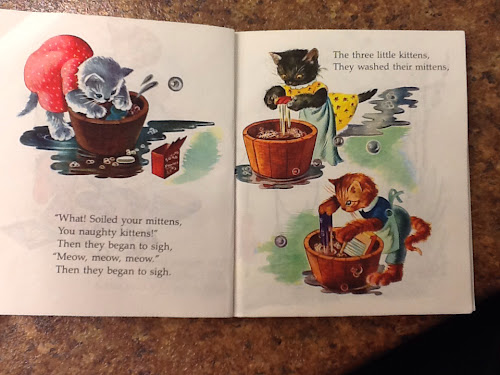 *sigh*. Could have saved them a whole lot of therapy, but it might be too late. 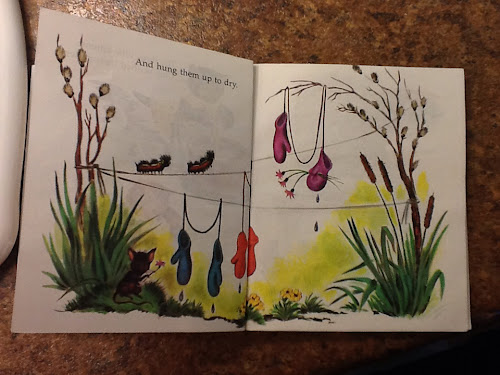 Then does mom even recognize their initiative with saving the environment- the sulphate free washing soap, the line drying? Does she bother to see how they've taken on responsibilities well beyond their two months? 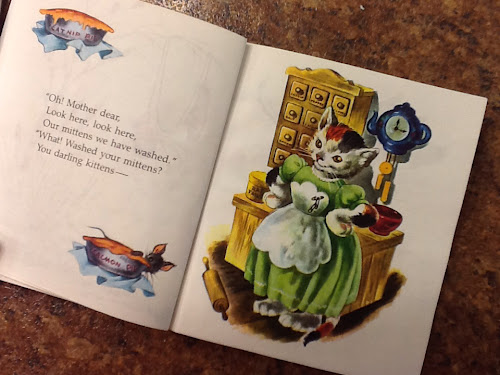 Nope. She's inside, rearranging her spices, counting the minutes until cocktail hour when she'll put up her paws and watch "Breaking Amish"on TLC. 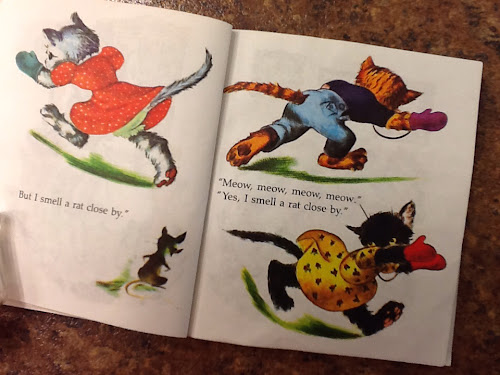 So she makes up some lame story about a rat so the kids will leave her to her distractions, addictions, compulsions. 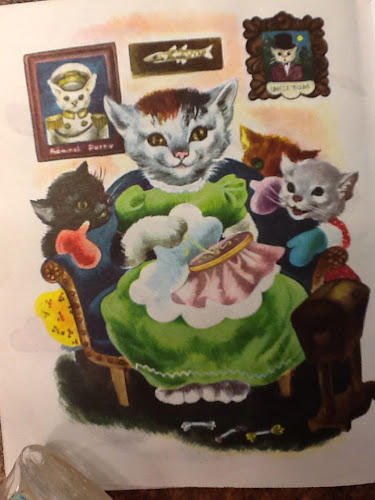 Oh, she presents well for the annual family photo.

Posted with Blogsy
Posted by joyce at 4:41 pm 9 comments:

is a book that I've not yet read. I think it's a book about ordinary people- "nobodies" in many senses of the word- who are actually little (or big, or whatever) representations, "show-ups" of God. The divine in the mundane.

I got Jim Palmer's book "Being Jesus in Nashville" for Christmas from my daughter Jane. So far I've read the intro and the prologue and I'm intrigued, and reaching for my computer to order "Divine Nobodies" and "Wide Open Spaces". It is an expansive feeling to want to read a writer who loves Jesus but not in the cheesy or confusing way I've grown so weary of in recent years. I'm relieved and grateful to discover in such a tangible way that I'm not alone in my questions, in my quest, in my heart's cravings.

I say all this in hope. Remember, I've not actually read any of the books yet, so please don't consider this an endorsement.

It's 2013. Every January when that page flips, and we have to get accustomed to writing a new number in the chequebook, my mind travels in familiar pathways. I no longer write long lists of "resolutions". They were dull, predictable, unattainable, and overly optimistic and have gone off the radar of my January traditions for many a year now. But at every markable change of season, I find myself thinking about goals. About directions- where am I going? What do I want to be more intentional about? What would I like to keep trying to let go of? Are there people or passions that I've become somewhat neglectful of?

I like this brain loop. It often involves me literally cleaning out cupboards, throwing away (last Christmas' jelly beans and bubble gums) nasty things that don't need to take up kitchen space. It involves wiping things down, giving things away, taking stock of what is still there, and how to make good use of it. I like that my hands find a way to practise what my brain is simultaneously working on in a figurative sense.

With this in mind, I have a blog post in "draft". Its long, and personal, and can't be scratched out while spinning plates, wiping noses, etc. It requires my full attention, a long stretch of time, and a cat that barks.

So because that stuff will happen in a pig's ear, I'm pecking out this scattered blog post in fourteen seconds because of what needs to be said, needs to be written down before I forget and get swallowed up in the anxiety of every day and every problem and petty worries.

There's a bunch of stuff I want to work on in 2013. Good things that I'm excited and hopeful about. (and scared)

Meanwhile, I took my daughter into Winnipeg this afternoon to usher her into the second half of her year's adventure. She'll be joining her "outtatown" team, taking a bus to Minneapolis, then flying to Guatemala, not to return until April. I'm happy and excited and not worried for her. She's a grand gal, with an excellent head on her shoulders, and she's about to get her eyes opened to see a great bigger world than what she'd known before. Its going to grow her.

So I was surprised that I choked up when I left her there with her friends. I just sat there in my dirty old van and let a tear fall. I didn't want to leave the parking lot, and I didn't want to miss out on hearing about her every adventure, listening to her laughter, hearing her voice. I want her to go, and learn, and stretch. But she'll become grown, and stretched, and learn-ed. And my mommy role keeps changing, even as my daughter changes.

So I pondered on this while driving off, while shopping for food, while making my way back home again.

Upon arriving home, I noted for roughly the trillionth time that there is an awkward snow speed bump at the edge of our driveway, where the snow plough pushed up a ridge on his or her way past. Its one of those things that I forget about for days on end, working at home as I do... then remembering it again and cringing a thousand cringes at the thought of all those patrons who have to launch over that small mountain in order to bring their tinies to my back door for the day. (I let them in. They don't actually stay at the back door).

I decided to tackle it. Right then and there. I strongly dislike unpacking five billion dollars of groceries anyway, so felt in no rush to find my way to the house. Besides. I had kind of driven up my own driveway at an angle, and that's saying something about the utter lack of hospitality that kind of obstacle poses to people who have to do that every day, just to get their kid to daycare.

I grabbed a spade-ish shovel and got at it. It felt sort of powerful to hack away at that hardened ridge, see it slowly break down, and know that I was finally being proactive. I suspected that I looked like a girl with a girly shovel doing a girly job of ice hacking and thought for a moment that it would be nice if no one I knew or sort of knew would drive down the street while I was girlishly pecking away at a teensy ridge.

I leaned on my shovel to sort of survey the traffic and noted a bobcat coming down my street. I imagined a manly man sitting in there, and was glad that I had taken a break, thinking how wimpish a shoveller I might appear to the untrained eye. But then I realized that it was even more pathetic to stand at the end of a driveway, shovel in hand, and do nothing, so I got back at it. I was shovelling away when that machine reached my driveway, and I heard a kindly voice call out: "Would you like me to kind of do a pass across your driveway, clear that snow for you?"

Without a moment's hesitation, I resumed my casual leaning on a shovel position, and watched, grin spreading from ear to ear. A tidy sweep with the loader, a clean scrape and the ridge was gone.

I felt a crazy sense of the profound, grinning there in my driveway on a January winter's night. You might think I'm being dramatic, but I wondered if he knew- this apparent "nobody" (sorry if you're the mayor, or a major NHL hockey player, or a visiting saint)... I wondered if he knew that he was bringing me something of the divine? I wonder if he knew about the lump in my throat, the thought of my daughter growing up and my gratitude for the people who have and would continue to step into and speak into her life? I'll bet he doesn't know how I felt myself growing lighter, heard myself laughing, felt like shouting "I LIVE IN THE BESTEST TOWN EVER!"

I don't know the fella in the bobcat, and I can't begin to speculate on whether he has dark periods of repressive introspection. I'll likely never know if he questions his place in this world, his faith, his worth, his value. I don't know what thought process if any he indulged in before deciding on that thirty seconds of good deed.

But I do know that as I stood beaming in my driveway, full of every kind of thought and emotion, some anybody brought me a little piece of the Divine. Just like that.

Posted with Blogsy
Posted by joyce at 10:55 pm 4 comments: