I have sinned, its been eleven days since my last confession.

And I probably have stuff to confess, like how people's faces have been annoying me lately. 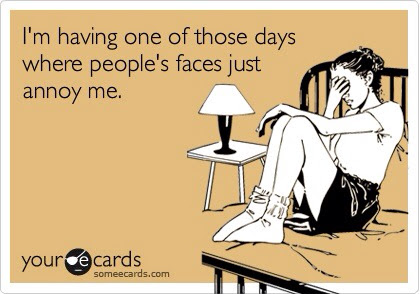 I haven't decided who to blame for this phenomenon; pinterest for planting this image in my brain and allowing me to pin it forevermore; or Early Onset Winter and Greyness; or people's faces. It's a toss up.

Regardless, its largely the faces of people who I love which annoy me, and this complicates things. The dog keeps looking at me like I"m about to do something amazing, the husband lets words out of his face that reduce me to the emotional maturity of a gnat, and then there are the children. Lovely people, really. But yesterday one small person chiselled a groove into the drywall (how do they manage these things?!) and another smallish child urinated on a vintage chair that I quite like(d) the way it was. Without eau de yucka-pee. After that their faces pretty much annoyed me, so I had to concentrate on a tiny imaginary dot just behind their heads so that my annoyance would reamain invisible to the naked eye. I think it worked, but repressing my true feelings is clearly worthy of a full confession.

In other news, I had to call a sick day this week. I've never had to do that in the past nine or so years of doing dayhome care for tinies. I've always managed to pull myself together to some sort of degree that I fake it through my workday and not have to make those early morning phone calls that I know I wouldn't want to receive if I were the parent of the wee one. However, with absolutely no warning, I was awakened at 4 AM on Monday morning with a yak stuck in my throat. It reappeared at 5:45 when my alarm went off, and the floor kept drifting up to where the ceiling should be so I knew it wasn't going to be an awesome day for potty training. I like how kind everyone was when I phoned them at a ridiculous hour to say "no go". Really kind. I work with some of the nicest people in the world. The nicest. Not only do they trust me with their kids (a super big deal), but they pay me for being sick without me asking. That's kind of Jesus-y in my opinion.

(While I type this, the dog sits just to my left and STARES at me. Full of expectation. Do you know how annoying this is.)

I have more things to complain about, but they involve infringing on people's privacy and I'm too irritable to deal with all that. Besides, that would entail more confessions and I'm not actually Catholic. I'm sort of Mennonite, and we don't even have release of cubicle confessions. We just kind of walk around chronically feeling guilty for having been born, taking up space, emitting odours, breathing in and out.

Posted with Blogsy
Posted by joyce at 7:22 pm

A wee boy upchucked on me Monday morning. Later that night I was stricken. Being a good American I still dragged my sick body to the polls to vote and quite probably infected my fellow citizens. On Wednesday I thought I was better and watched the wee girl who wore me out in fifteen short minutes. By Wednesday evening it felt like someone had lit a match to my throat and it has been burning nonstop since.
It was 68 degrees today in this part of Michigan and all I could manage was a quick sniff out the door to inhale that wonderful dry dead leaf smell of fall.
Just thinking of all the great thrift store finds I missed today has me deeply saddened. I'm sure I missed out on stunning bottle brush trees, shiny Shiny Brites, and crisp vintage Christmas music.
I want a November do over.
And an overdose of kindness for my fellow man, who I'm finding rather annoying lately...

I TOLD YOU NOT TO KISS ME

Sounds to me like a good time to create that "Me-space" we were talking about the other night. That space where you can shut the door, crawl into your pj's, put on some soft music, curl up with a giant bowl of buttered popcorn and veg with a great book!

"We just kind of walk around chronically feeling guilty for having been born, taking up space, emitting odours, breathing in and out"

Catholic guilt is more famous, but Mennonite guilt is epic! I am two provinces and several conferences removed from you, but you have pegged it.

Now my dog is awake and looking at me that way because I am laughing out loud.

Awesome post. I am relieved that I am not the only person who struggles sometimes with finding peoples' faces annoying! And I hate it when the dog stares at me expectantly!! That's why confession is so healing...we realize we are not alone.

You clearly suffer from visual allergies. Please do listen to this and know that you are not alone.

Oh yeah....I've heard there is a cure. It might be tequila.