I think in shapes and colours; not cold, hard facts. I think that should be called "Left-brained" thinker because it sounds so much more arty than right-brained. "Right-brained" sounds like a brain that gets all its facts right. "Left" sounds more like there's room for perceptual differences and finger painting. 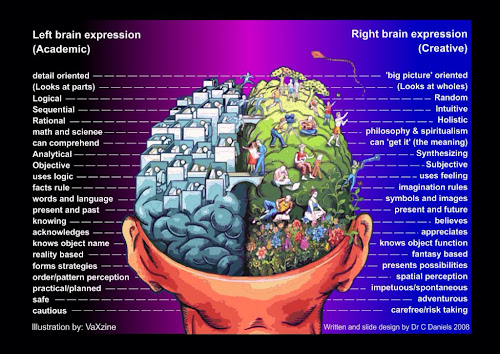 I'm so right brained, that when I pulled up this picture, I got so caught up in all the pretty pictures of flowers and explorers, kites flying, and people building bridges that I quite forgot what I was researching for.

I actually pulled up these google images because I'm wondering- Should a right-brained girl whose so right-brained that she thinks she should be called left-brained because it sounds prettier serve on a board of directors? 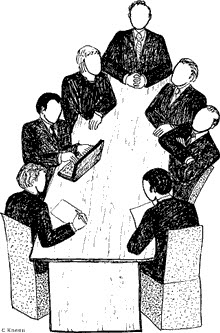 According to my research, boards are made up of people who don't have faces.

I don't like any of those things and I have an undeniable face. 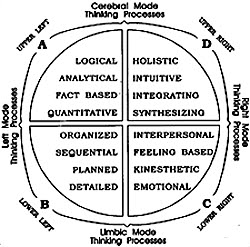 Note the words on the above diagram indicating the sort of brain that would do well in a board meeting: "fact based, quantitative, organized, sequential, planned, and detailed". Then compare and contrast with the words describing whatever side of brain I am- that one that can't remember if its left or right. "Holistic.... Intuitive.... FEELING based.... kinesthetic, and emotional.

Now try to imagine these two distinct people types discussing something business-like at a meeting.

The way I'd wrap it up: Let's just knock out some bricks and start by slamming a door in over there. I think it might look awesome. If we're wrong, we'll just knock out more bricks and make it an open floor plan. Instead of deciding where everything should go, shouldn't we just get started? I mean- how are you going to know where the best place to put a table until you actually start moving stuff?

What proper board members say:

So and So has drawn up a detailed floor plan, including where each stick of furniture is going to go. It's drawn to scale, and each chair, door jam, and dust bunny is drawn up on a seperate piece of paper so that we can spend months trying out different combinations. Not a brick nor stool shall be moved until this diagram reaches Biblical perfection.

Regarding the security system. Me: Really? Can't we all just be friends? If they steal all our silverware, how about we give them the candlesticks too?

Proper board members: Let's get together again and discuss this further. And after that, we'll talk about it again. Delegates A through seven can check out prices and warranties on security systems in the southeast quadrant of the four nearest cities. Delegates 11 to Eternity can phone all their relatives to find someone to install it for free. All remaining members prepare research papers on ideal placement of said security cameras. 10,000 words, double spaced, black ink.

Appreciation dinner: Me: well...... I hate hotdogs. What if somebody's mom were to throw together some veggies and dip, and we just kind of see what happens? We could always take a walk to the gas station if we need treats. And on the way there, who knows who we might run into? And that might take care of the need for entertaiment?

Proper boardmembers: At 12:00 noon sharp on the day after a full moon, four women are required to boil the potatoes of three major grocery store chains for exactly 15 minutes. Further instruction will be given at next month's board meeting.

I think that board meetings should always involve snacks and drinks, maybe some crayons so that we could all practise coloring outside of the lines. I think we should have some energetic music in the background, and maybe some throw pillows just for ambiance. But I guess that would be more like Friday night than a board meeting. Which again gives me pause, and makes me question:

Should a person without a linear thought in their head really agree to serve on a board??

Posted with Blogsy
Posted by joyce at 2:13 pm

I'm so right-brained I don't have a left brain. (My husband would likely tell you it would be hard to find any bit of brain in me). My brain is so scattered it just ain't there. :)

The world needs us of course- how black and white life would be without peeps comme nous. And honestly, we do get things done, even in our less than methodical manner.

Take a peek at the bottom line of the first picture...right side. "Risk taker". That's why you should join the board.
VB
Of course there are other reasons as well. Many other reasons. Granted it will have frustrations, but left side people are full of frustrations too. Or so I imagine.