Wondering Where You Are 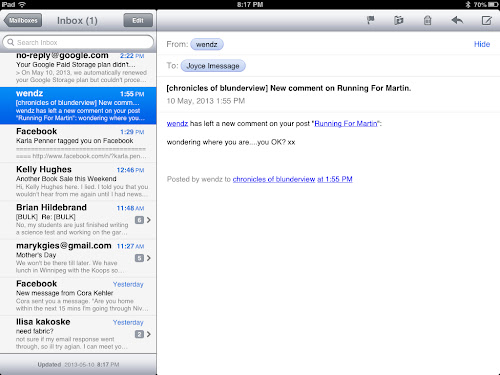 Apparently I've dropped off the face of the earth, by my utter absence here at the Chronicles. Wendz commented earlier today. I was touched. 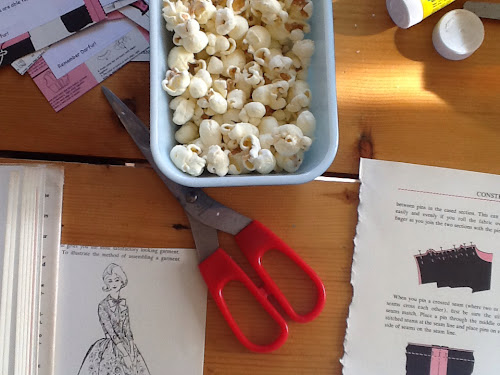 OKAY. Really okay. And I'm glad it matters to you.

Right now, I am here. With my bowl of cocaine/ white cheddar popcorn, and my glass of Brian-made gin and tonic (Happy Friday!!), with my scissors, my vintage McCall's sewing book, labels for 53 bags4darfur, and a glue stick. I'm trying to imagine my day tomorrow at Ten Thousand Villages, celebrating International Fair Trade Day with my fellow Winnipeggers. 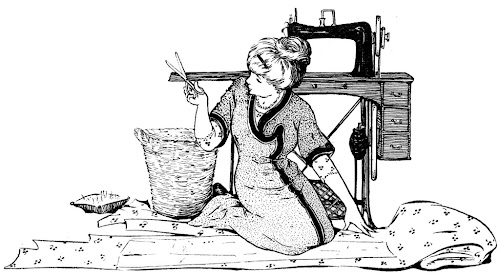 I've been doing a whole lot of this, in preparation for tomorrow morning. 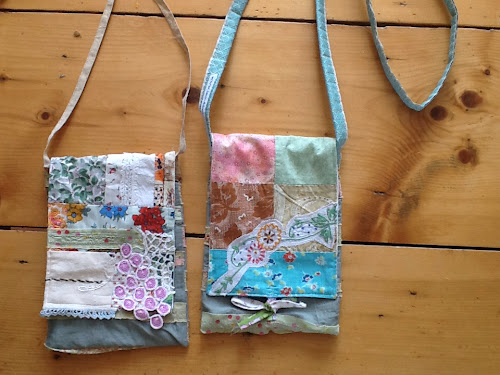 While intermittently listening to my kid's radio pop station (I know all the songs from travelling in the car with them) and CBC radio (which I switch away from when the interviewer has such a nauseating voice that I'd rather listen to songs about early twenties angst sex than subject myself to irritating voice any more) Although I did hear a happy story today on CBC about a woman who actually survived for two weeks in the wreckage in Bangladesh. Crazy. 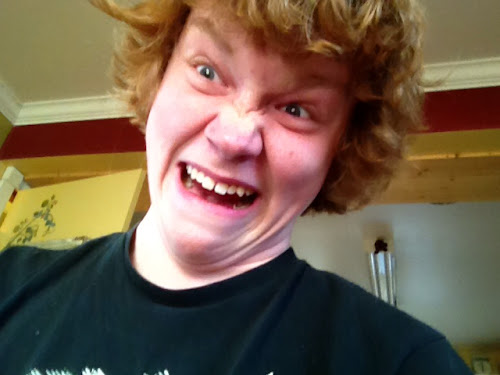 I've been worrying about my strange offspring.

Cuz that's what mom-types do. 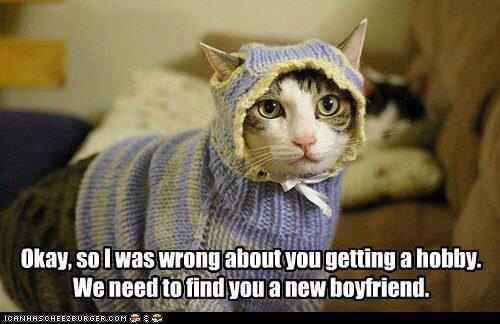 Which actually relates to worrying about the kids.

Sometimes, to change things up a little, I go visit my geriatric parents. Then I find myself in the middle of conversations like this:

And yes, I remember that I already shared that on facebook. But really. This is what my life is comprised of. 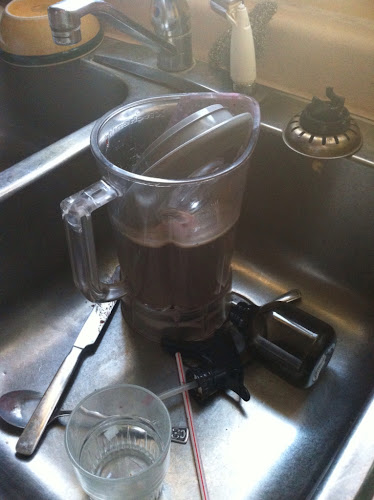 In my spare time, I've been texting my kids pictures like this: the blender in the sink at six in the morning when I distinctly remember telling the kid THREE F-ING TIMES the night before to clean up after her or himself. 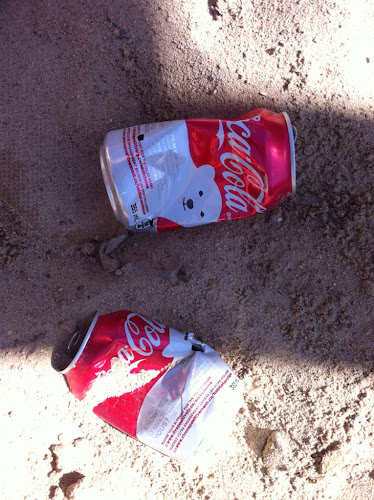 And texts to certain other kids (I had four. I was strangely optimistic at the time) about what I find in the sandbox after they've done target shooting off the deck and not cleaned up their targets, which are in the sandbox the very next day when I'm trying to be responsible with other people's children. 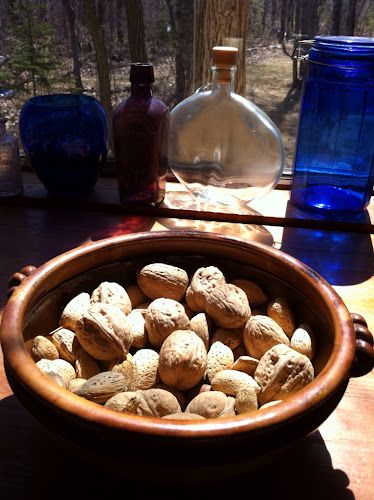 I also spent some time catering with the husband. In an awesome house made out of straw bales (and other stuff, silly), while drinking some wine and cooking up some amazingly delectible stuff. 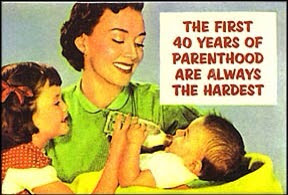 I spent a little time with a friend who had a newborn. She wasn't thinking at the time. Her other kid is almost five and she forgot what silly people newborns can be, so sometimes she comes to my house for adult daycare. She thinks its a break for her, but I haven't confessed to her that its fun for me to have a grownup and a wee baby in my house. It makes me happy but I prefer that she thinks I'm doing charity. Besides, she brings me cinnamon buns. 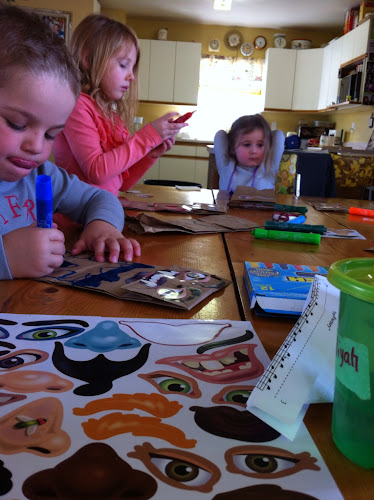 I've been making puppets with preschoolers. That's not as easy as it sounds. 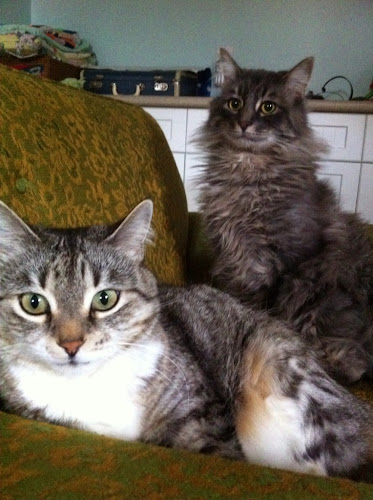 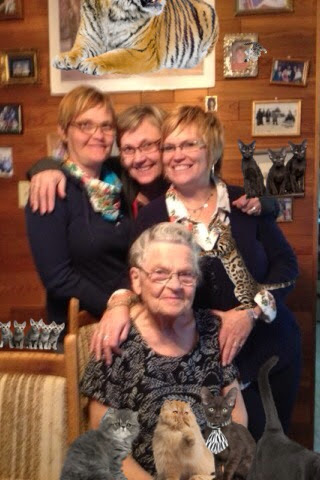 And adding cats to other pictures. (guess which one is me). 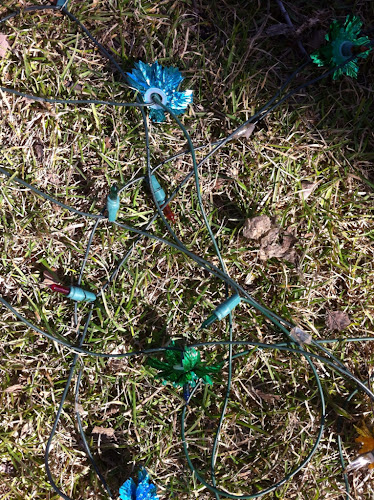 I even took down the Christmas tree. 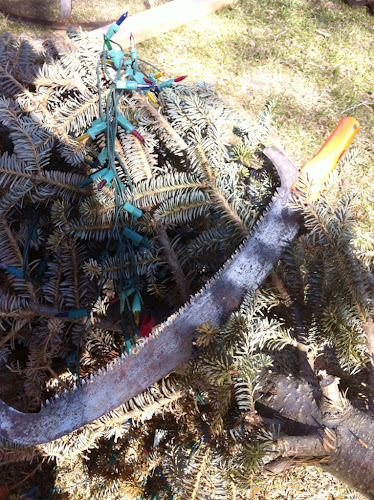 Well, it was already down, in the sense that it was out of the living room. I have a very special, very religious ceremony that I celebrate most January's in which I chuck the Christmas tree out the front door of the house. I leave it there until the snow thaws, which this year took nearly until the following Christmas. Then I pull it into the backyard and throw it in the fire. 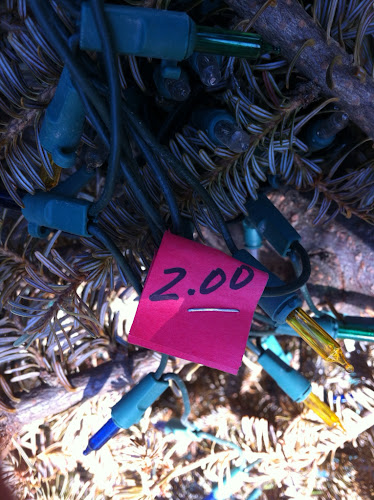 First I have to remove the twinkle lights that I evidently invested $2.00 in at the thrift shop.

Maybe that's why I don't take terribly good care of them. 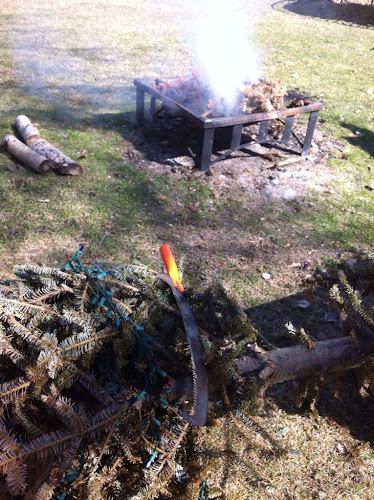 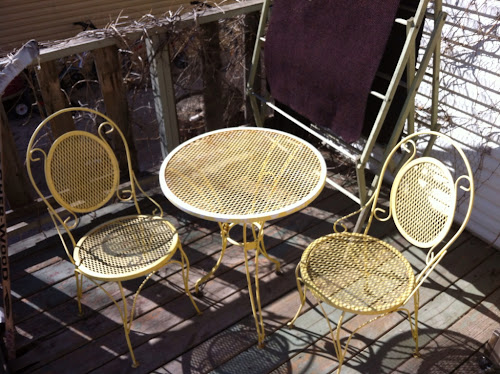 I've also been selling random stuff from around the yard. Stuff that I can't be bothered to repaint or relocate this year. I'm lazy that way. Speaking of stuff that I don't want to be bothered to fix. Anyone interested in buying our roof or our deck?

I've been busy with my terribly important life. And besides otherthinking aboslutely everything, worrying about the most obscure things, and pondering the meaning of my life,

Posted with Blogsy
Posted by joyce at 9:05 pm

Well I laughed. Out loud. More than once. I shouldn't laugh, I know, but I found your post so very funny. Maybe because it sums up life. All the days of all our lives. The itty bitty mundaneness of it. The maddening routine and the irritating repetitiveness.

It's like this video I watched earlier this week.

I watched it and enjoyed it because boy oh boy did I get it. If you have ten spare minutes inbetween all that stuff you have to do then you could watch it too. Just because it might make you smile and nod your head, like I did.

Actually, you SHOULD laugh. And then laugh again.
Exactly the right reaction!
I shall watch your link today in my moments between impersonating a sane person at my sale.

I truly loved your comment yesterday- you're a peachy one!

You are the tabby, in the front row, on the left. Obviously. I also laughed my head off, at your post.

You are a feature at 10,000 Villages! WOW, my favourite store. They even come to campus a few times a year. You really are my hero.

I adore babies - my neice is giving birth any day now. You are holding the little neice of my dad's hot pastor - I know. Enjoy.

Love the picture of you and your sisters and your Mom. Awesome. And yes, that is life, made up of such random and assorted stuff, all mixed together till you don't know if you're coming or going.
And I'm very happy about the adult daycare. You are a wonder.

In six weeks we shall be blessed with a new born.
If I weren't already exhausted from the five who to me all still seem very recently born I would be jumping up and down with excited anticipation.
But if I actually had any energy I would get up and put all of the toys away. But why? The presently most recently born will be back tomorrow and she doesn't care if there are toys scattered about.
Do you get the summer off?
Glad to hear you are doing well!