The older I get, the more fascinating I find family to be. Gone are the days when I wanted to put as much distance as possible between me and whence I came. I've gone out, blazed my own trail, and now come back and learned for the first time all over again, that we are sooooooo sharing lifejackets in our particular gene pool. All of us.

I'm glad I went away and then came back, because now I know for sure that its not just because we shared the same borscht every Sunday, warmed the same church pews, called the same people "aunt" and "Uncle", or never had the courage to stray far from the nest. Turns out, an awful lot of us did a fair bit of exploring, without looking around for permission to do so, or holding each others hands. 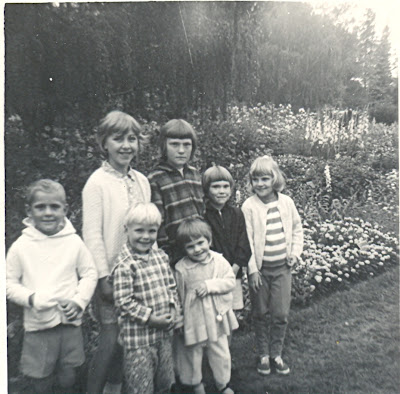 *expected to come are: sister Mary, top with exceedingly short, brown bangs, and a dashing plaid sweater; sister Kathy directly beside her, about half her size, and cousin Bev, the bright blondie to Kathy's left. The two little cuties in the front row are cousin Grace, who is flying in from Toronto (whoo hoo!), and sister Carol, who is wearing capri pants waaaaay before their time. 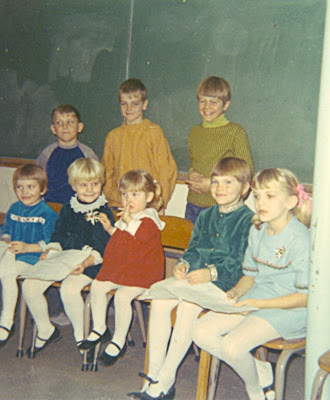 My relations are a fascinating, intelligent, hilarious, gifted bunch. The women are strong, soft, fiesty, complex, compassionate, complicated beings. We have much to learn from one another. Much to validate in one another.

And so, as a growing tradition, this weekend has been ear-marked for our annual trek to the cabin. Over food and drink, laughter and tears, we anticipate adding more layers to our relationships as cousins first, and for some of us, Friends much later.

Sadly, this year will be smaller than some. Due to the recent passing of a shared relative, the women whom he called "auntie", and "mom" will stay behind to join hands and try to soothe the raw and inconsolable.

The chubby red-dressed babe in the lower picture is yours truly. I grew up with cousins, sort of. There were no cousins my age, as many of them were thinking of having their own babies by the time I came along. My siblings were closest in age to me, and I had a cousin or two that matched up with their ages, and one cousin who was a few years younger than EVEN ME, bless her heart, but she moved away when she and I were very little.

So, its been a recent discovery for me to find kindred spirits in this swampy pool. We're all over thirty now, and the relevance of our age has really taken a back seat. The commonality of experience and genetics brings us together, now by choice. We relate now as women- timeless, learning and leaning on one another.

And if that's not enough, we also share a passion for good bread, real cheese, and a dem fine wine. Now, that's stuff we never got at the family gatherings.
Posted by joyce at 2:09 pm

I work with a woman who gets together every year with her cousins and sisters, they've been doing it for years.
I grew up without really knowing my cousins. My parent's siblings weren't very prolific and we lived all over the place. I wish I did have that though.
Enjoy your weekend.

WHAT??!!
Are you serious?
you never had cheese at your family gatherings?????

I'm so glad you find such joy and support and love in your family, as well as the hardship and pain... which are all so interconnected.

I hope its a wonderful weekend, and what you need.

If my mom gets to come than I do too!

I've read your last four posts - and now I am caught up with you and I am glad you write.

Hope you all have a wonderful time!

Thanks for stopping by my blog. I have a new computer and have been having a hard time posting pics, but I'm working on it... I am so glad you write and post! I always enjoy your posts and your eloquence! thanks for letting me stop by to read! Take care and have a great weekend at the cabin!