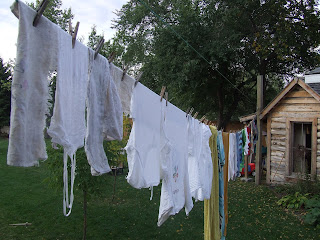 Any astute blog readers will have deduced from the previous blog post that our household runs at a standard enviable to the average pedestrian earth-resource-pillaging North American citizen. We are lovers of our earth, and as such, sneer at the very notion of wasting precious energy on an electrically powered drying machine to get our tighty whities to pounding-with-a-rock brilliant whiteness and dryness. We denouce all products that make our over and under garments static free and smelling like ocean breeze with a hint of vanilla bean.

Of course, such a commitment requires diligence, and that almighty word: dedication.
Sometimes, the laundry that spins on Monday, hangs on Wednesday, folds on Friday, and hopes to see the temperature controlled interior by Sunday. Just in time to recognize that one is five days behind laundry once again.

Most often, the laundry gets hung while children are building sand castles, jumping on the tramp, and generally causing backyard mayhem and bliss. Aiming to squeeze the last ounce of potential out of each precious moment of each day; laundry is generally hung, dried, and folded on the backyard deck turned temporary laundry room. And that never means that the stacks of clean stuff will actually make it into the house and into their respective rooms- much less drawers or closets.

And that's where the dog comes in. Really.
Lately she has been particularly annoying, clingy, irritable, and pissy. By pissy, I mean that on a walk around the neighbourhood she insists on urinating on every third blade of grass, every stop sign, hydro pole, leg of man, and truck tire. Aggravating when one is pushing a double stroller, holding a leash, and watching out for three kids on bicycles.

Which brings me to the drops of spaghetti sauce and ketchup on my kitchen, dining room, and living room floors. Which aren't.

Being a bear of very little brain, it took my friend to point out that the sweet little innocent doggie that was a puppy five minutes ago.... is in heat. It's not my fault. On the farm we had dogs, but we ignored them whenever we wanted to and never bothered to notice when they bled all over the bleedin' place. If they were lucky enough to survive the Russian Roullette of living on the highway. How was I to know that the entire friggin' animal kingdom has a menstrual cycle and only us few lucky ones get infomercials about tampax?! 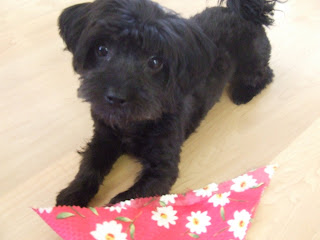 Well, one must pride oneself on being teachable; at the very least. Girded with my new knowledge, I resolved to become more vigilent with the dog. She's a good dog, and can be trusted to go out in the yard without running away and causing her loved ones undue stress, so we've been priveleged to be fairly lax on her captivity. Knowing how the inside of my grey matter resembles swiss cheese on many many levels, and how easily it can become distracted by pretty colours, or smells, or a blue bike, a concerted effort was launched to steep my brain in this newfound responsibility.

I began by telling everyone I knew.
Logic suggested that by hearing a voice stressing the importance of containing the dog so as to spare her the loss of her innocence, my brain would respond by accepting this as an important truth that required follow up. Regardless of the fact that the voice would indeed be my own. My grey matter would never know that, so the approach seemed fail proof.

First victem was easy to target- a daycare mommy come to pick up her cherub. What else would she want to hear than tales about how the little doggie was bleeding on the floor and how exciting that our wee little one had approached that magical and mystical time of age. Yes, she had come of age, and one could never be too careful. Shotguns would never do for my little virgin. She would be cloistered inside her Red Tent and we would be more than priveleged to celebrate with her through this wonderful and strange new territory.

I waxed poetic about doggie periods as daycare mommy and I made our way onto the deck to dim some of the preschooler noise, and allow this committed pet owner to continue her eloquent expose in the wide expance of the great outdoors.

That's when it happened.

A white poodle, bounding out of the mists; through the field behind our house, up through the backyard and straight up onto the deck. A boy doggie, come to find our sweet virginous pet. Finding no suitable mate (since the grey matter had responded appropriately, and left young suitor inside, safe and sound); the white poodle decided to leave his urinous calling card instead. 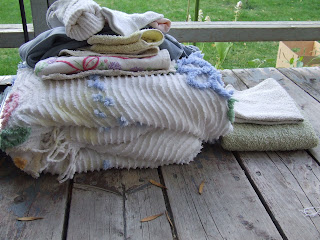 On the laundry.
The laundry that had already made it through the Monday, Wednesday, and Friday of her life cycle.
I'm guessing that scent of ocean breeze and hint of vanilla bean is now definitely, entirely out of the question.
Posted by joyce at 2:20 pm

Oh Joyce, you are just too funny...love your doggy story...L

I wanted to cry, but I laughed instead.

Hope we can still be friends.

Ok. based on my theories of optimal creativity, you must be incredibly, incredibly tired!
your writing... your bags...
please puts some of that energy into a full time artist/career plan!!
yours truly
boler babe

Ewww - I, of course, just had to enlarge the photo so that I could see the yellow stain. And yep yep yep - it's there.

I'm so glad the virgin was cloistered within her bower.

L- I'm so glad to see you here again!

Judy- laughing and/or crying, I will always love you.

Lory- I GOT ALL ECSTATIC TO SEE YOUR NAME AND COMMENT HERE!! Believe it or not; I am not exhausted. I've worked out a pretty good plan with sewing machines upstairs and downstairs; getting to bed by 10, 10:30 at the latest; and constant, constant multi-tasking. The way I like to do life, so that part is good too. Like you; pressure spurs me onward and seems to centralize that creative flow. Imagine yourself running out to the workshop when there are babies sleeping in the house and bacon frying on the stove, and you'll get my groove!
Besides... career planning: Never has been my strength. Remember that arts degree that I am three courses short on?!

Jennie- it is good to know that the photo was not taken in vain. Yes, the pissy spot is really there! I really don't have the time to drum this stuff up!

bh- Hopefully my cranial spaces keep coming through for the doggie; and all of the pre-schoolers are also on board!

oh man Joyce, I feel your pain. BOTH my females are in heat right now and my eldest daughter is ready to kill them. I've got spaghetti sauce all over everything. It's ridiculous.

After having a dog bleed on absolutely EVERYTHING, I finally discovered that you can buy a doggie diaper (looks just like a cloth baby diaper), with a hole for the tail ... you put a pantyliner in the diaper, change it once or twice a day, wash the diaper when it's all said and done and you avoid stains all over your furniture and carpet.

I think I still have the diaper, even though the dog is long gone. I'll check and see and if I have it I'll send it to you in the mail.

just checked and i do have it ... it's kinda stained, but it'll work. if you want it send me an email with your address and i'll get it in the mail today or tomorrow. :)

Very well written - I thoroughly enjoyed the rant! However to solve all problems with pissy dogs - male and female - get her fixed!

It could have been worse you know. Pissy laundry AND a pregnant dog.

ah yes. The fixed dog- but I do want to breed her when she is a little older than eleven months old!

Miss m- how kind and generous of you. I may get run out of town; but I think it may be worth the risk!

O.K. Joyce...it's time to bring in the laundry!

Hey, I just ready Lev.14 & 15 this morning -- AND --- THAT LAUNDRY would now be considered unclean!! It needs to be washed with water, put away for 7 days, washed again with water and then pronounced clean by the priest. Hope you did that! Your Schwester Mary