My Son, the Prodigy 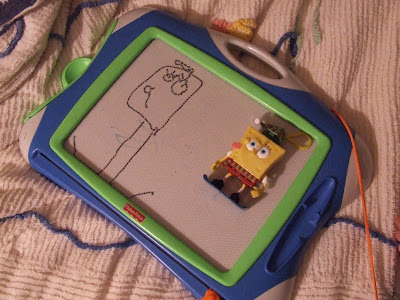 Ahhh, another prodigy in the Hildebrand line. Sammy has taken up drawing and does quite a remarkable Sponge Bob.

I suppose he'll draw like his sister Jane. Hopefully if Brian sets up an art blog for him like he did for Jane, he won't drop the pencil and run immediately for cover. 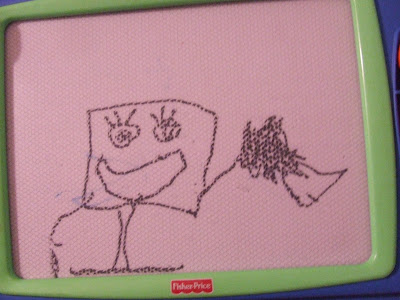 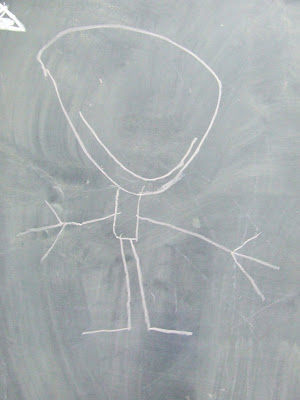 Today he moved into another medium. This always amazes me, when the drawing progresses towards having limbs protruding from the body and not the head, and the head holds eyes and a mouth. The fingers are new also.

While they were at it, I asked Jane to show him how to write his name with lower case "a" and "m". The brilliant little mind mastered it immediately.

Later as I was humming away at the sewing machine, I asked Sam to go all by himself and wash around his face. He came back so perfectly clean that I suggested he go out and get a job so I could spend all day on the couch reading, and maybe just playing with my sewing machine.

For the rest of the day, he just drew himself up a little taller, waved his arm towards the sagging couches and declared.... "I'm better at stuff now, so I can get a job and you can just sit on the couch ALL day, and read books!"
Posted by joyce at 9:32 pm

Really. Wouldn't that be the life? The boy is perseptive!

Ah - how quickly they blossom!

so cool! take him up on it while the offer still stands. there was a time that my boy got quite upset if anyone but himself were to vaccuum the house.

He's quite the artist! If he would like to work two jobs, I'd be up for sitting around with you!!

Ah, so you too have given birth to a genius. I also have done so a number of times. I am now in the middle of reading about 11 different books. Congratulations to you! Laura

What a blossoming artist.

Don't expect Sam van Gogh to support you if he goes out looking for a job as an artist :). His skills are admirable (and I love the progression of 'body parts' in kids' art, too) but it can be a tough world out there...