Me and Charlie Brown

I happen to know what I like.
And my family thinks that I have very, VERY poor taste when it comes to Christmas trees. 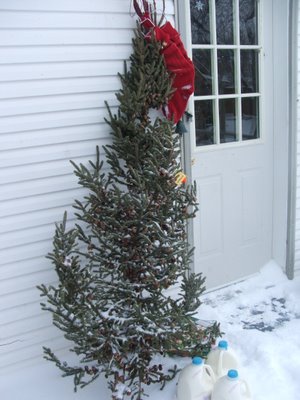 Which is exactly why I have to function in very manipulative, self-centered ways if we're to have even a shot at a Merry Christmas around here.

Several days before the festive, fun-filled, family-lovin' tree decorating day, I layered up seven preschoolers for a very special wintery walk to our local scenic tree lot, just a mere two blocks from our estate. (Okay, so its the gas station, okay? ) We perused the selection carefully, finally settling on a $16.94 gem of a tree, just covered in those adorable little nubby things. I was pleased that they offered free delivery. Not that I minded pulling two baby sleds to get there, but I wasn't too confident on which toddler to give the boot to so that I could haul little Charlie Brown home with us. Wouldn't my family be pleased.

Wouldn't they though.
With a great deal of gentleness and care for my tender feelings, they announced that I had brought home the ugliest tree that they had ever seen. I mulled that over for a while, pointing out to their inexperienced eyes how perfect the distant but evenly placed branches would be for displaying my collection of vintage ornaments. (which if they were to smash.... OOoooooooh, so help me. ) 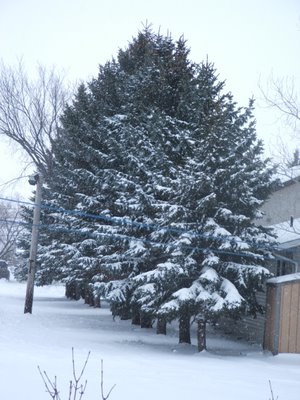 I reasoned that they were simply acclimatized to unreasonably large, and well-endowed evergreens that graced the empty lot behind our house. If they wanted a ridiculously perfect tree, I told myself, they could just go outside for some fresh air, and go gaze at those beauties.

But then mother guilt smit me.
"They are only children", she pleaded, "only one chance at happy childhood Christmas memories", she whined on.
"Don't you know that you have absolutely no right to have opinions? Have you forgotten that you are MOTHER, woman whose entire personality and personal taste, needs, and desires got shoved down that giant hospital garburator with your placenta(s)?"

I hung my head in shame.
BUT at least I had the van that day! And only two children to care for! There was nothing that I couldn't do.

So off we merrily carrolled back to the tree lot. I tried. I really tried to look at those fifty dollar, perfectly dome shaped thingies that they call trees. But my feet had minds of their own and I soon found myself gazing longingly at the gangly, lonely orphans in the north corner of the lot. AHA!! Leaning near the back, right up against the fence, was the perfect, perfect compromise. Yes, it was a spruce, and not a pine (which my tasteless offspring preferred). But it was a big pine! 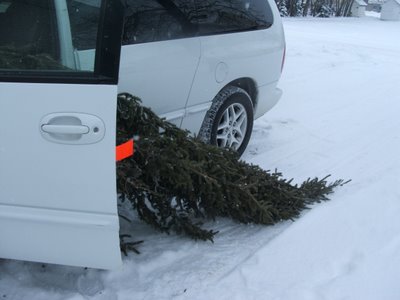 There was no time for delivery.

I thought my plan through briefly. Very briefly.
Then, I waited til the gas attendents and customers all looked pretty busy and distracted, and I dragged that big beauty up alongside of the van. The rear hatch was frozen shut, but I was not to be deterred. It would be a MERRY CHRISTMAS, and it was gonna start tonight, even if it very nearly killed me. The rear of the gas station opened into the back lane, which was very under-used, and quite possibly the only alley in the whole town that does not require mowing in the summer. At the end of the half block of back lane, I would be able to see my house, just across the church lot on the corner.

I hopped into the drivers seat, the trunk of that big tree resting on my thigh. Singing lullabies and "God rest you merry gentlemen", I eased into the lane and headed towards home. I happened to pass two men in half ton trucks who looked themselves to be very full of the Christmas spirit themselves, grinning ear to ear as they were. I don't suppose it had much to do with ten feet of spruce dragging along the snowy street beside me. I smiled and waved, acting very nonchalant. (And that's no simple thing to do- waving whilst hanging onto a tree, and driving, and working consciously on not thinking too much about what I was doing.)

Safely home again, with my prize tree intact, I hurriedly pulled Mr Big straight into the house. All eleven feet of it.
We have eight foot ceilings.

After sawing off the bottom three feet, Mr Big looked exactly like Exhibit A.
It looks like its gonna be a Merry Christmas after all.
Posted by joyce at 6:23 pm

My favourite trees as a kid were always the sad, pathetic Charlie Brown variety but my husband has a penchant for the great beauties, too. The one he chose on Saturday is 9-10' tall and still propped up in our backyard, awaiting the saw... Hope he finds it before the 24th.

We didn't have trees growing up.

My favorite poinsetta though is the sorriest looking ones in four inch pots. I call them Charlie Brown Poinsettas...

i can't believe you drove with it hanging out like that - wish i coulda seen it!!!

Try to explain that one to the police when an on-coming vehicle takes out the treetop. That's the best picture and a great story.
-Heather

Oh my, you've brought back memories! When my mom and dad moved from one house to another (about 11 years ago), my sister-in-law and I were the last ones left behind cleaning the old house. Just before we left, we realized that a very large house plant had gotten left behind. We didn't know what to do with it, but we put it in the trunk, with the top hanging out the back. When we got to the new house, the rest of the family gathered around to laugh at the very bedraggled plant hanging out the back of the car. We've never quite lived that one down.

You are very funny, Joyce.

So, one year I begged, pleaded, threatened and THGGM let me get one.

It would not hold up our ornaments. And, as they slide down the branchs, they took all the needles off on the way.

While in the lot, it must have been sprayed by a cat. Or, more like 25 cats with urinary tract infections.

Of course, we did not KNOW this until we turned the lights on and things heated up.

Our kitty was NOT amused. Not to mention, us.

Never have had a real Christmas tree since then.

That first Charlie Brown tree is looking pretty dandy in front of my mother-in-law door. Thanks a million for running out and getting that for me with 7 pre-schoolers in tow.

It survived the trip to Winnipeg just fine in the back seat of my car, with the tip sticking out of the window.

i LOVE that tree.
and speaking of charlie brown trees...have you wandered by our house late at night? my light loving husband finally got his dream come true. he found some old lights in our garage and decorated a tree on our front lawn. good thing we finally have snow. i was getting a little annoyed by the big long yellow electrical cord he had going across our lawn and driveway.
!!
really!! maybe i'll do a post on that.
(if i could only find the time)

OOOh, I'm having a little night time chuckle over these comments.
Andrea, I'm glad to hear that you are not manipulative like me! Shall I come and trim the bottom six feet off of your beauty?

ME: that so reminds me of the years I spent renting an apartment with Carlotti. We had a poverty mentality, so one year we decorated a pointsetta that we had won somewhere. I must find the photo and post on that one!

Esther: I'm thinking that a couple of local men went home with a story that night... (and hopefully it didn't end with that ancient, misguided saying; "women drivers"...

Heather #1 What I was more concerned about was my thigh and right arm being taken out... but I'm glad you were thinking ahead.

Heather#2 Oh, please don't get me started on house plants!! I have a tale or two on those as well! (and moving is "of the devil". I have a memory imbedded in my mind of our move three hours away-- the cat howling in her kennel, and that friggin' half-dead fig tree draping across the back of our hatchback honda... yuck.

Oh, Judy. You've made me pee laughing. The needle-less branches. The pissy branches. The intolerant husband. Again, this brings up a potential post. The year that the cats kept climbing the tree and every night we'd come home to a tree prostrate on the floor. We wired it to the walls and that took care of the cats. Before Christmas though, all that abuse had taken its toll, and every single needle dropped to the floor...

Linda: hee, hee. NO> I FULLY PAID FOR Two "cheap" trees.
Its a great way to save money. Only spend in increments of less than twenty at a time. You can do it several times a day if you want to, but you just have to throw in an extra measure of denial.

You betcha Carlotti-- Only several hundred more Christmas trees, and we should be all squared up! Anything for you, you know that.

Ruth- I just knew You'd have my back! And I love hubby's spirit! I must wander by sometime with half a dozen or so pre-schoolers to check out that be-deck-ed tree.

Thanks everyone. That was a lot of fun.

thats a great tree, I love the quirky skinny Charlie Brown one. We've quite often made do with a weird collection of branches in a tub. You're right, great ornaments look best on less than perfect trees.

Joyce - this is hilarious. I think both trees are great

HA! Only you!
The guy at the tree lot will be talking about you for years.
You would make an awesome first responder...
"Hang in there mister we're almost at the hospital..
don't worry I gotcha...
we should be there in about another half hour....
You should probably try to alternate the side of your head that's dragging on the highway."