The whole Darfur thing has been going so remarkably well, that I seem to have a bit of a reputation for being a bleeding heart or something. Recently, my eyes were affronted by this plea for help: 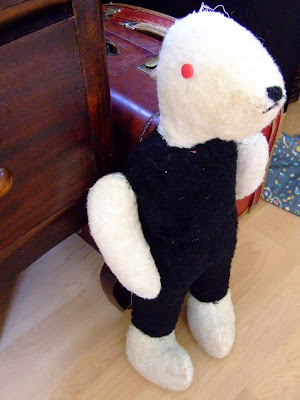 "Abram was unable to attend the school in his local village, after the unfortunate incident with a herd of incensed, nutritionally compromised barbies. The loss of his eye and floppy ear have had devastating consequences, but for only 17 cents per day, you could make a phenomenal difference in the life of this poor, less fortunate bunny." 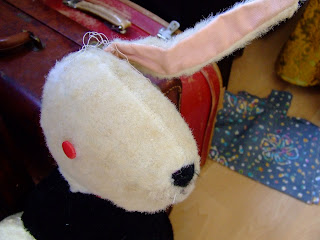 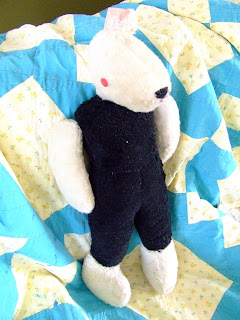 How could I say "no", and directly after Easter too?! I don't imagine poor Abram had much self esteem left, after being passed over for fetching wood and water, and then the hardest blow of all: not hiding coloured eggs in the snow encrusted villages of Manitoba and the greater world.
*
Well, I don't know what you would have done, but to me there was only one right choice.
*
Stay tuned for seasonal updates, and a photo showing Abram fixing his eyes on a steaming bowl of oatmeal, wiggling both ears, and smiling gratefully,
Posted by joyce at 1:51 pm

right now i am laughing inside trying not to wake my sleeping babe a few feet away... please don't take offense Abram, you are in good hands, and who needs two eyes anyway =)

Ah, blessed to be a blessing!

That is you, my friend.

Joyce! He looks so clean since I last saw him. Did you give him a bath???
Mary