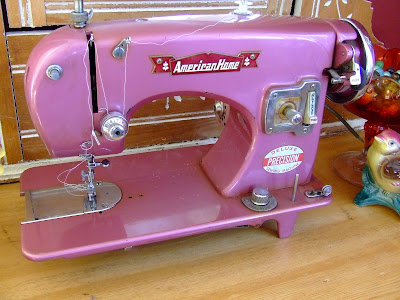 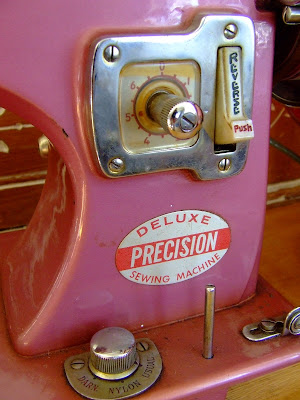 Having recently PURCHASED A PINK SEWING MACHINE!! ... I think I may be ready to call it a life. This proud new owner has been ... Investing an impressive amount of time on the internet, and have yet to find that anyone else in the human world has a pink sewing machine by the name of "American Home". Never mind a PINK sewing machine that is also DELUXE, and has PRECISION! 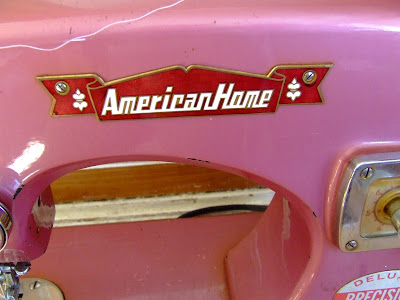 Here's how it all went down. Our humble town has become somewhat of a suburb of late. We've got all these swanky new uptown developments with cul de sacs and fancy bay names and goose dropping lakes behind walk-out basements. Keeping up with the Joneses, so to speak, our humble little thrift shop started to feel a bit cramped and inferior. So it did what any good money scrimping Mennonite organization would do. It bought the old chicken murdering spot and covered the blood splatters and wet feathers with new carpet and lead paint. Then the volunteers and cast-off distributers hoarded stuff for a few months and carefully arranged it tidily in the killing-field-turned-mission-field thrift shop. 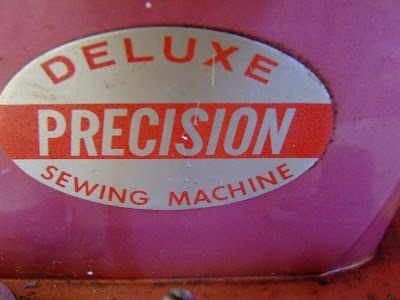 Much to my dismay, I couldn't make it to the grand opening on March 11. I did a great deal of deep breathing (and even considered deep knee bends but thought better of it), to ward off the stress- imagining all those less deserving people scooping up all the good stuff. As soon as possible, I did make my way downtown to check out the new digs. There, way up on a self above the fortrel fabric scraps was the most beautiful piece of machinery in the whole world. I almost had to walk away. The visual stimulation was too much, and I was already clutching the mother load of old carded buttons. "Self", I said. "This is a machine. This machine is much bigger than a button, or a bedspread that you could at least justify by turning into a Darfur bag or a summer tent, or a parasail or something. One does not simply wander into a store one day and pick up a sewing machine. It is not done. It is not sensible. It is not necessary".

And so I listened. I took my buttons home, played with them, lined them up, put them in a pretty coloured dish and feasted my eyes on them.

And then I thought about the pink sewing machine.

The following week, I went back into the store. I wandered around, chatted with the townspeople, kissed the babies, and pretended to be casual about the machine high up on the shelf. "Probably really heavy", I told myself. "You already have two sewing machines, you know. You've got your bernina- undeniably the least stupid thing you've ever invested in. You've also got your old black singer that came in the great old treddle cupboard. Now you're just being ridiculous. Go home, make some borscht or something".

So, once again I listened. All the way to the following Saturday- when some mysterious gravitational force propelled me back down main street, entirely against my will. I pretended to look at the dishes, the bedspreads, the toys, all the while knowing that I was being controlled by a force much greater than my own. A force so powerful, that I soon found myself not only standing beside the pink beauty once again, but reaching upwards to lay hands upon it. "Wouldn't hurt to look at it. I'll see that it's much too heavy to be sensible, that the price is inflated, and that the bobbin winder is hopelessly broken. Then I'll go home and do something sensible like sew nappies for the poor or something. On the two machines that I already have".

I got it down from the high shelf. I laid it on the floor. I chewed my cuticles. My heart began to sing and pound and I felt I could have danced all night. (but then I reoriented to time and place.... BAD idea.) There was a piece of fabric underneath the presser foot that indicated perfect tension. There was a lovely metal banner splashed across its bosom boasting "American Home". There was no price tag, so I thought it best to approach the manager. Surely she would see that I was interested in the thing and she would automatically inflate the price, being mindful of those far, far away mission places that needed my money more than I do.

She didn't.
She whispered "twenty-five dollars" into my hungry little ear.

I remembered that I had four children to feed, Easter lillies to buy, and soccer, basketball, flute, and youth retreat fees to pony up. I remembered whining about those very things only a few short lifetimes earlier. They rang emptily in my head at I gazed at that little vixen.
I simply had to have it. Sure, I had a white one, and a black one, but a PINK one? Never even seen such a thing. I remembered that $35.00 I had won in December for the local paper's writing contest. I remembered saying that I would use that money for something monumental, since I would always think of it as the first money I made piecing words together.

Surely this was providence. 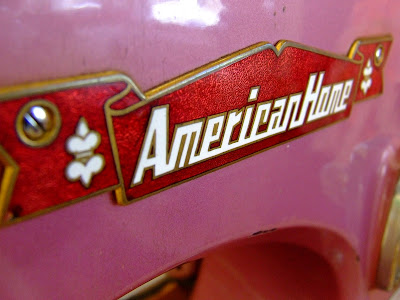 Surely, this machine could not belong in any home other than this one. Not only is it precise, and deluxe, and pink.... it operates like a dream. I kid you not.

There are a few quirks. The foot pedal is not a foot pedal at all, but a knee pedal. In its original form, it came in a sewing case or cupboard and the pedal was mounted to the side for the right knee to operate. Because the cupboard is no longer in existance, but my determination is in season, and abundant... I spent some time learning how to hold the fabric with my left hand, and operate the pedal and the reverse button simultaneously with my right hand.

Might have to look into the feasability of grafting a third arm onto self.

soooo beautiful. i love it!

btw if you figure out how to graft that 3rd arm unto yourself let me know how you did it. i could use at least another set as well.

You are hysterical! Maybe I should go back to that thrift store and buy the lovely pink atlas after all. Your machine is a lovely piece of art. As well, you should know that walking away once and then coming back and finding the same item (in the same place) at the thrift store means that it was meant to be!

Is the American Home banner glittery? I don't know how you ever walked away from it.

My newest machine is a black singer in the treadle foot cabinet. It has a vibrating shuttle (had never seen one before) and a 1951 model year. It's not as decorative as my 1940s machine but it's still lovely!

There! I'm all commented out for now...

I find it absolutely facinating that they chose red for the color of labeling. Or rather pink to go with the labeling . Do you think they decided on pink and then somewhere down the assembly line some one noticed the error and that is when modern fashion was born?????? I wonder. Plenty of room in my house if your finding that she doesn't quite go with your paint colors

I hear Antiques Roadshow calling you. Maybe Pamela will be returning to Morden sometime soon. Melissa

I love that it can remind you of your cash prize!

I'm so glad 'she' came home with you!

Joyce, I can't think of a more deserving home for that beautiful piece of machinery! I'm sure it will be well loved!

No one and I mean no one, could love that pink machine more than you!! you were meant for each other! I'm glad you went back for it!

Congrats on your new baby!

I LOVE IT! and it will make you happy everyday and won't talk back and won't track in dirt, she will sing for you for years to come.. what a worthy treat for a worthy sweet beautiful gal!

Joyce, I am so glad that you landed the sewing machine. A perfect match!
I am so jealous and I don't even sew.
Joanne

Oh my word, that is the most beautiful sewing machine ever. I don't sew, but i tell you this; had I seen that beauty in the thrift store, I would have bought it.

:( I also missed the glorious opening and all of the good junk. Now there's only crap left (except the most beautiful yellow canister with pansies on it and yellow pot with a lid that they snatch out of the regular buyer's hands in hopes of creating a bidding war). **sigh**

she sure us a beauty. wait until i show you what i bought in the world famous antique market in Snohomish Washington!

i think you were made for each other.

i was just given a machine just like this one except it's apparently by the brand MERCURY...

its the same, i kid you not

the model number is R-20L and i have the user's manuel that shows no further company info or model name...
there is a tag that says it was made in japan, hence maybe the 'americanized' brand since it was most likely sold in the 50's

i read online that MERCURY was a line by the MORSE sewing machine company, but i've been as unlucky as you in finding any info at all...

im glad you're pleased with it, that it runs well, as i havent tried it yet. i probably should go over the mechanisms and oil it a bit before giving it a try.

feel free to email me if you want more info or if you have any to share!!
my adress is minou62(at)hotmail(dot)com

I picked up a blue version of this, I believe it to be slightly older than yours. I too haven't found much info on it, however mine is also marked along the bottom right that that it was made by, White Company. Looked into that an got a little more info. but nothing aboutmy model. I think yours fit in there though. The blue one I own, does not deluxe or precision labeled.
My two cents, hope it helps.
It was nice stumbling by... until another day. :)