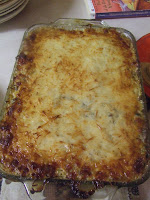 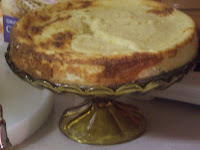 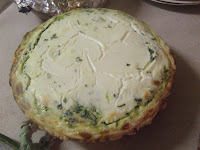 Is it any wonder that a city as cold as Winnipeg is known for its quality and variety of restaurants? I don't know too many people who would rather strap on a pair of skates or skis and navigate the river skating path than to sit down to some hot comfort food on a bitterly cold night in February.

We're too content to stay inside to even consider making a trip to Winnipeg to check out their marvelous restaurants. Instead, we've worked out a bit of a pattern for ourselves, right here at home. Brian has become utterly obsessed with the Moosewood cookbooks, and most fridays he rushes home to put together the chosen recipes of the weekend. Last friday it was spinach and ricotta pie; Italian cheesecake; and spaghetti squash smothered in cheese and other delicious morsels. (I pretty much stay out of it, aside from picking up the necessary ingredients on my weekly trip to the city.) The kids aren't much for trying new, vegetarian fare, but they are rarely disappointed in fridays, as Brian makes it a habit to stop at the store on the way home to load up on ketchup chips and coke. (shut up). While I try to dredge up some enthusiasm for my last hour or so of work, and Brian's dishes begin to permeate the air; we wait for our friends to arrive. People pile in with dishes for us to try, balanced with the wine of their choice.

Thus, we usher in the weekend.

We put samples of numerous new recipes onto our plates, and through mmmmmmm's and ahhhh's, and "that's-a-keeper"s, we begin to engage in conversation. My friend Cheri calls it "small group" which is a not-so-new church trend that people are highly encouraged to participate in. In its ideal form, it is an oppurtunity for exploring spirituality in a safe place, a venue for asking the hard questions, and a place to develop relationships beyond the superficial. We've got all of that going on.

Sometimes the conversations stretch well past the point of the kids getting tucked into bed, and long enough for the dessert to have begun to digest. Sometimes long enough for that spinach pie to look appealing again, or for heads to begin dropping onto chests. (well, for me anyway.)

It's an awesome way to start the weekend. Even if Saturday is painfully dull and dominated by dustballs and static-haired offspring, it's a good feeling to remember that Friday was a highlight, and not a horizontal exercise in channel surfing.

Tonight, we get to pretend we've travelled off to the East coast. Our friends are hosting, and cooking lobster. Brian's moosewood cookbook has been studied, the drool wiped off, the ingredients purchased. There's still a bottle of red wine from last Friday. We're both fighting the flu, and the temperature refuses to budge much higher than minus thirty (for about 800 consecutive days now).

But there's a lot of good to focus on instead.

That sounds like a great way to start the weekend!

DID YOU MAKE CHEESECAKE????? MY CHEESECAKE IS UGLY
UGLY
UGLY!!!

i am so ashamed.
where do i hide my hanging head?

That sounds scrumptious, no matter how you look at it!

Wow. You are healthy.

I'd rather participate in horizontal channel surfing on THIS Friday night.

Oh my, that sounds like heaven! Next time I come to visit I want Brian to cook for me. :) No offense Joyce, your cheese quesidillas were scrumptious!

That sounds like such a lovely way to spend Friday evenings, eating, drinking and talking with friends.

I knew that Brian loved to bake, but WOW, that sounds awesome!
I am jealous. here I am, sitting with my head in my homework yet again, drooling over the thought of all the scrumptous food you just described! and it is only
9:40 AM !!!
We have got to get together sometime soon and visit again!
AND EAT!!! LOL
what we do best at gatherings, am I right?!
Love ya,.....
Joanne F-F