Many people come to the "mid-section" of their lives and experience some sort of crisis. They bemoan their lost dreams and ambitions. They fear that their life will leave no impact on this world. They view other forty-somethings with their career empires, or their svelt figures in an empire style tunic with grief and envy. They fear that they have lost their edge, or even the potential of every acquiring an edge. Or possibly that their edge has been well buried under pounds and pounds of Costco truffles, hint of lime chips and McDonalds hot fudge sundaes with nuts. They recognize that while they were off living young and reckless lives on extravagant cross country used-clothing and furniture shopping sprees that they forgot entirely to plan for their future. The not-so-distant future when they can no longer be gainfully employed, due to the fact that the middle-aged-spread has conquered and they can no longer tie their own shoes to get to work on time. This becomes so overwhelming that they find themselves sitting down in their polyester mumu for a nice warm snack of toast and almond butter and a box of halva to wash it down.

Then they do something crazy. Buy an expensive car. Get one of those fridges that dispense ice cubes. Have an affair. Buy something retail. Grow a curly moustache. (it becomes easier for women to acquire this goal right around this time.) Begin to dress in ways less becoming to a forty-something. (Hey! I hear there's a party for just that sort of woman on NOVEMBER TENTH! GEE, that would be in just six short days!!)

And for women, there's another twist. She may be entering that less-than-glamourous period of her existance known as the change of life. (A man must have thought up that watered down version of waking up sweating, feeling your head explode, and throwing yourself into a snowdrift to resume some semblance of normal temperature.) She begins to assume that her childbearing years are behind her. Another age of oppurtunity slamming her in the face, thank you very much. She stumbles through her grief of never again waking up to the demands of a ruddy faced squalling little bundle of selfishness. Never again will that splashy sound of vomit erupt from the back seat on the way to anal retentive Aunt Bertha's house for faspa. No, the days of pablum crusted high chairs, perma-snot on the right shoulder, the garbage can being pushed (scratched) across the hardwood (now distressed) floors and nights of awakening to that sweet baby smell plus mustard diaper and puckered expectant lips every fifteen minutes are sadly behind her.
And in her grief, she just might do something crazy.
~
~
~
~
~
~
~
~
~
~ 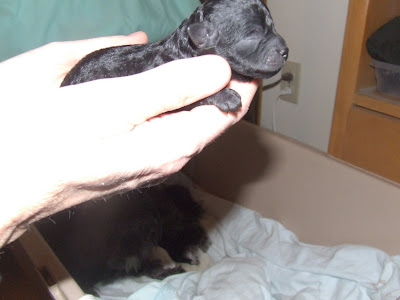 but WHAT a cute puppy!

wow - this post really got me excited for motherhod :p

LOVE the pup! it's like having a child. so i've heard.

Beautiful and at least they listen better than children do. And never tell you how evil you are.

Your description of motherhood was remarkably accurate, should be included in all pregnancy books:)

That ought to get me TWO puppies.

Oh, my. What an adorable puppy!

yust to clarify...
Least you think I currently have said puppy. She was only born on October 31, which makes her a mere four days old. We'll have to wait until mid-December or so to bring the sweet thing home.

I waited till I was 50 before I got a puppy. They are definitely less work than a real live baby. Glad you're not doing all those crazy things that other 40 somethings do!

I love it already. I'm so making Roselle take me to your house when we're out for Christmas.

That's why God invented grandkids...the best is yet to come...Lindalew

So you'll be toilet training him at the coldest time of the year? It's bit more work than a kid...a kid can sit in a wet diaper for awhile (until I remember to change the diaper)....puppies....not so much. Although I wouldn't put it past you to "whip up" some doggie diapers....out of something you found at the thrift store (of course)
I now read your blog much like I would the paper every morning-except I don't usually get a good chuckle from the Free Press.
Carolyn