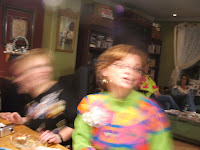 Last year, it was my 39th birthday that prompted the madness. This year it is the paparazzi.

I've had no time to get my pullovers in a knot about it. Its been that kind of a week.

But some really crucially important stuff got taken care of. 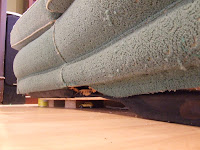 I took a good , hard look at the couch. Well, what I could see of it through clouds of dust and flying straw. Yes, that's right. Straw.
I pushed, pulled, and dragged that monstrosity through the kitchen, out the entry way, and over the edge of the deck. I saw it laying there covered in leaves, torn, abandoned.... And I just knew that Brian would kill me if I left it there for more than fourteen seconds. So, I went after that beast, and hurled it continuously, ass over tea kettle, til I could slide that motherload into the garage.
*
(and hey, if we need an overflow area at the party on Saturday, November 24 at 7:00 pm at my house, bring your own nummie, dwinkie, and sweater.... that couch in the garage may come in really, really handy.....)
*
I meant to recover the remaining worn furniture in old sweaters, but GEE! Where'd the time go?!
*
So, you're fresh out of excuses. In fact, you badly NEED a party. I've got two spare nasty sweaters upstairs in my closet, Brian has just done a big party run in the stadt, and the now infamous couch has been replaced.
*
Did you ever stop to wonder what kind of parties the next generation is likely to throw? Well, repeated bending-over in my line of work, combined with the utter lack of tact and discretion in the preschooler population, has led me to believe that the next generation will be scouring thrift shops for slacks to wear to the Butt-Crack-Pants parties that they are most likely to host.
*
Aren't you glad you only have to find a sweater?
Posted by joyce at 5:22 pm

So now that your couch is gone does that mean you won't talk about it anymore...augh. How did you know some of us haven't found sweaters yet?

are you trying to say the couch is GONE?

I'm trying to understand whether its MORE couch stories you wanted to hear, or whether you were practically begging me to stop?

besides, if you don't yet have a sweater, why do you want to waste time yammering about couches?! Actually, i'm doing a thrift shop run first thing in the morning just to make sure there aren't any uglier things to be had. Don't worry, there will be some spares.

ruthie- its in the garage. Straw, big heavy wooden frame, chunks of wool-like stuff, and lots of leaves. Wannit?!

I do believe it was the first post about that couch where I first found your blog. And you.

You can throw out the couch, but you can't get rid of me that easily!