Yeah, About Those Nails 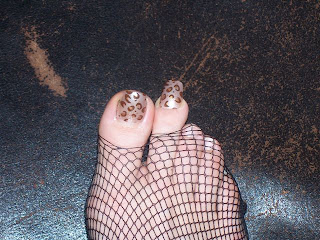 Nancy wasn't able to come out to the grand fortieth, but she very thoughtfully sent out six packets of plastic fingernails covered in leopard print. Last night during the party, Alice (with her servant heart) graciously applied nails to any finger or toenail that came within her grasp. I quite enjoyed the roleplay of claw-lady, even though my fingers audibly and literally moaned and begged for an oppurtunity to breathe and move.
~
In the morning, I awoke to find myself picking at those nails. My fingers were really gasping for breath by now. Remembering some less tolerant guests with zero etiquette who began soaking their high quality nail jobs in nail polish remover just minutes after their application, I sensed that the removal of this accessory may pose quite a challenge.
~
By mid-afternoon I received an e-mail from a guest whose alter-ego in the "RW" is that of elementary school teacher... and it was clear that the tenacity of our nails was a common bond. She had given up on authentic removal and had settled for trimming them down with hedge clippers and hoof trimmers, and applying several hundred coats of a more subtle tone of polish to cover the leopard print. The following day was, incidentally, parent and teacher school interviews. It seemed prudent that some manner of professionalism be applied, lest the parents have evidence of their son's downward spiral since being placed under the classroom tutelege of Ms. So-and-So.
~
By faspa time at ma and pa's, the conviction of the nails burned with shameful urgency. The nails had to come off. Mother refused to make eye contact with those little round leopardy bits on the ends of my hands. Her nose and lips curled in visible disdain and disgust at her daughter's obvious indiscretions and lack of proper training. I don't think she could have been less pleased if I'd shown up in an animal print thong and thrown a bottle of rye into the summa borscht.
So, I came up with a perfectly sensible solution. I gently worked the butter knife under the edge of the nail, grimaced a little, felt the dna in my fingers stretch and cry audibly and literally, then I popped those babies off.
~
Hopefully none of them landed in the schmondt faht.
Posted by joyce at 7:14 pm

That's hilarious!! I had fake nails put on once for a friend who needed to practise for "beauty" school. I'll never do it again!! Hope your fingers are ok

Oh my!!!! I didn't realize that those lovely nails would cause such distress and require the jaws of life to remove. But they sure paved the way for a grand tale.

I'm still hurting from the nails, but I finally got the last one off on Sun. night. Oh the pounding... all worth it, however!

"bottle of rye in the somma borsht"??? Ya kill me girl: )Lindalew

wow!! i loove them.. wer did she buy them from. they look wicked!!!