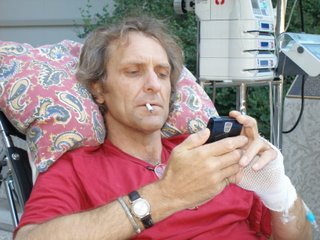 Been thinking about you today, wishing that you'd come around. I'm not thinking of myself really, but about your wife, and your parents, and about our other brother. You're probably wondering about your kids-- they seem to be acting their age, laughing and learning, and showing signs of being so much like you...

I'd like to send you a note on that blackberry- just something stupid like I'd do on days when you were still here, but we knew you were sliding away. We didn't want to monopolize your time, so I'd just write that you were on my mind, and that I love you. You don't have to write anything back, but it would be nice to know I'd told you that you're missed.

Dad is looking old. He never did, ever. Today at faspa we got caught up in a conversation about his recent physical and Carol and I started to pepper him with questions about this test, and that symptom.... things that we've never really gotten into before. After a few questions, dad got that exasperated father look on his face, and said-- "Can we change the subject?" We laughed and obliged, but his naps on the couch, and difficulty with walking, and these visits to the doctor have taken us all by surprise somehow. Dad has never acted his age before.

Mom said that she had called our brother this week and asked him what he was doing. "Sitting by the window and crying" is what he told her. He misses you.

I feel like I lost more than a brother. I lost the number eight that was us- five girls, three boys. I lost my other brother years ago, but somehow between you and I we could piece things together and make sense of the goodness left in him. Now, I feel like dad is slipping away. Maybe not in weeks or months, but still his mortality is clear.

It sounds really irreverent, but the image of dominoes keeps revisiting me. Were you the first to set the inevitable in motion? I know we don't live down here forever, but couldn't we go for some sort of group plan? The whole idea of domino-roulette really unnerves me. We're all gonna fall, but there's just no way of knowing who's next in line? Who will have to watch the others go before? Who will be left here to pick up the pieces? order the cheese and platz?

You've been on my mind Ken, and I just wanted to say I love you.

Joyce, so eloquently put. And Ken, I love, and wish I could see you too. Laura

what a special relationship between a sister and a brother...may God hold you in his loving arms today

What a poignant post.... It touched me so. You see, I lost my mother nearly five years ago, and I still sometimes catch myself wanting to pick up the phone and call her to tell her something funny or interesting that the kids have done.

I watch my father and his slow descent in health and memory and it frightens me. One domino has already fallen...

Big hugs. I hope your heart can find some healing.

Nice post. Makes me think I should send a nice friendly e-mail to my brothers just to let them know I like them and I'm glad they're still around.

What is it about cheese at Mennonite funerals? It provided a great deal of comic relief at my dad's funeral.

my heart has found much healing, but as I'm sure you all know, there are times when we simply MUST allow ourselves to drain, once again.

Heather, good idea. They probably already know, since you are clearly not a gal who is afraid of vulnerability. But its always nice to hear it.
cheese and platz. who knows. It used to include sugar cubes as well, which was just our favourite when we were little. Somehow at weddings and funerals we were allowed to eat those things without discretion.
How about raisen buns? Did your dad get that?
It makes me crazy that you lost your dad that way. Life is beautiful, but very fragmented.

Hey Ken.....that note is from me too, every word. It's a very strange thing to be able to laugh, love and greive all at the same time. Miss you, Kathy

oooops....grieve, how do you spell that anyway? K

sigh... I'm only as far away as Austin and I feel so far away -- Joyce, I've cried quite a bit in the last week. Anytime anyone asks me how I'm doing in regards to Ken, the faucet opens. Now I think of the healthy brother. When I cry I'm not sure it's because I will never see him again on this side of heaven, or if I'm crying for Kate & the girls. Today again, when I thot of it, I had to remind myself that it's really true. He is truly not with us any more! so sad.

Its all very con-fuddled to me as well. I have no answers.

next month will be 15 years since my brother went to be with his Lord, and still his absence is so evident, and I still miss him so. If I let myself "go there", the pain feels like it was just yesterday. He was such a great guy. I love you Jeff! how the watertaps flow with the typing of his name.

joyce hugs to your tender heart, your brother is so well loved, and his kids and wife have a treasure in your affection.

Joyce - I read your blog everyday, and again today, your words pulled at my heart strings. We never met Ken (though it feels like we knew him nonetheless) but we have grieved much with you and your extended family. This blog was beautiful - reverent even. Thanks for sharing it with us.
..ede..
xx

Sad and sweet. I think someone needs to invent a Blackberry with which we can have contact with loved ones in the Great Beyond.